We all know Twitter is a toxic wasteland of radioactive shit re: vaping. As I'm sure you're well aware, much of my time is spent on Twitter. And I stumble across a lot of the shit. Although sometimes I really wish I didn't. 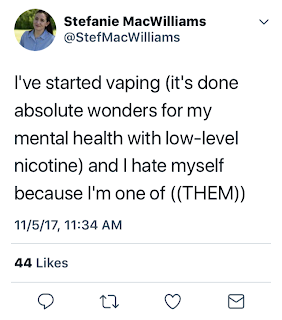 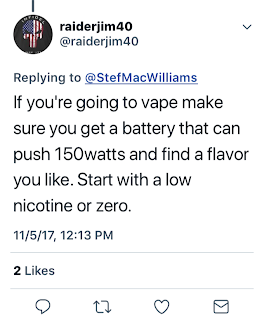 Bravo, Stefanie! It has been shown that nicotine is beneficial for mental health, and I'm glad she has embraced the technology of vaping to meet her needs.

I used to follow Stefanie on Twitter (until a few months ago). She seems to be a very sweet person, and her tweets are rather entertaining when she calls out nonsense from SJWs. I don't think I unfollowed her for any other reason than my Twitter feed was overwhelming and I needed to drop a few people. She wasn't following me back anyways, so I knew she wouldn't miss me.

There is always the possibility that her "one of ((THEM))" comment was sarcasm. Unfortunately, sarcasm font isn't an option yet. Unless you're using Comic Sans, then nobody will take you seriously.

The media sensationalises every little thing about vaping, and as a result smokers who have chosen to switch to vaping have an ominous black white cloud hovering overhead, which is a magnet for stupid comments from the ignorant/ill-informed masses.


"You'll get popcorn lung from that!" "That thing is going to explode." "Ugh, that's worse than smoking."

And of course, everyone's favourite,

I'm an optimist, so I want to believe Stefanie had good intentions with her tweet. But comments like that don't help us at all. Vapers will never break free of the stigma if we add our own voices to the roar of gross and blatant negativity.

Now! On we go to the rage-inducing response to Ms. MacWilliams from @raiderjim40:


"If you're going to vape make sure you get a battery that can push 150watts..."

Why on earth would that be the first piece of advice you offer to a vaper? For heaven's sake, I've been vaping almost four years, and the mod I'm currently using (an iStick Pico) goes to 65W, but I have it set to 40W. There is no sensible reason at all to recommend a vaper get "a battery that can push 150watts". Quite frankly, I think that's a fucking insane recommendation.

One of the things that makes vaping truly unique is that it's entirely customisable. What works for me may not work for the next person. And that's okay because there are literally millions of combinations of eliquids/tanks/RDAs/mods for the choosing.

To immediately suggest a vaper needs an incredibly high-powered mod to be satisfied is irresponsible. That's just my opinion, but I figure you're reading my blog because you actually care about my opinion. Which I do appreciate, by the way.


"Start with a low nicotine or zero."

FOR FUCK'S SAKE, YOU FUCKING SPACKER. NICOTINE IS NOT THE ENEMY.

I couldn't resist. I had to let our pal Jim know what I thought: 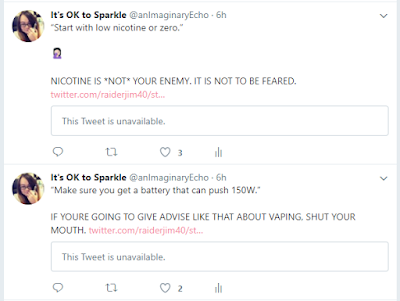 Obviously, Jim didn't like what I had to say. 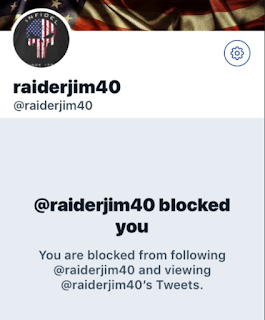