I was accused of being an anonymous vape-addicted shill again today. This shit is getting rather old. 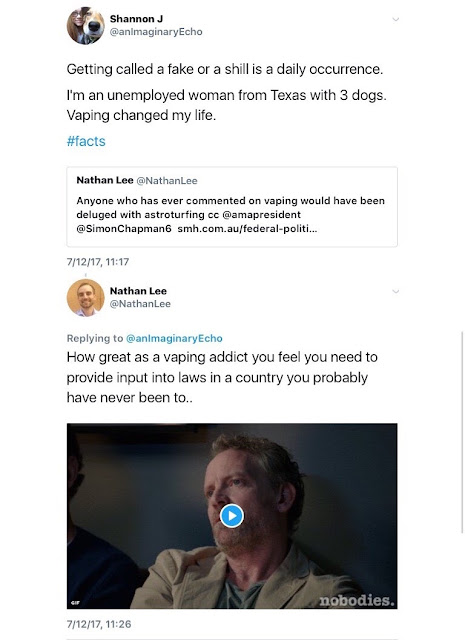 For the record, this Nathan Lee chap is from Australia, home of our favourite professional troll with a nasty attitude, split personality and an awkward case of memory loss, Simon Chapman. So I think you can already tell where and how this is going to end.


Really? Funny he should mention that. When I switched to vaping from smoking almost three and a half years ago, I started at 12mg/ml nicotine. Within a year, I had more advanced vape gear and was using 6mg/ml. A few months after that, I dropped to 3mg/ml. It didn't take long for me to figure out that I was completely going against everything Dr. Farsalinos has said about tobacco harm reduction because I was vaping a lot, so I sorted out the vape gear and went back up to 6mg/ml.

I read somewhere that the average cigarette contains 15mg nicotine. I vape 2ml per day. I'm actually taking in much less nicotine as a vaper than I was when I smoked 10-20 cigarettes/day. Besides that, nicotine is benign. It's essentially the same as caffeine. And it's good for your memory. Who fucking cares how much nicotine is in my beloved White Lotus?

Erm, there were no restrictions on who could submit to the consultation. Zero. Zip. Zilch. Nada. I could have made a submission from Jupiter, and it still would have been counted. Most likely completely disregarded (as the rest of them probably will be also), but still counted.


"in a country you have probably never been to."

To be fair to our new friend parasite, he is correct about this: I've never been to Australia. And for good reason, too: literally everything there wants to kill me. Spiders, snakes, all kinds of really creepy creatures that I want nothing to do with or be anywhere near. Including Simon Chapman. I'll be perfectly content with seeing the Sydney Opera House from the plane on my way to New Zealand.

He gets half a strike for that. 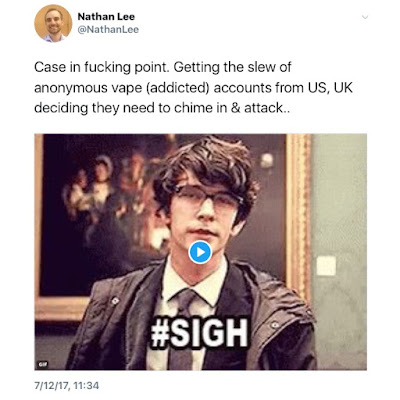